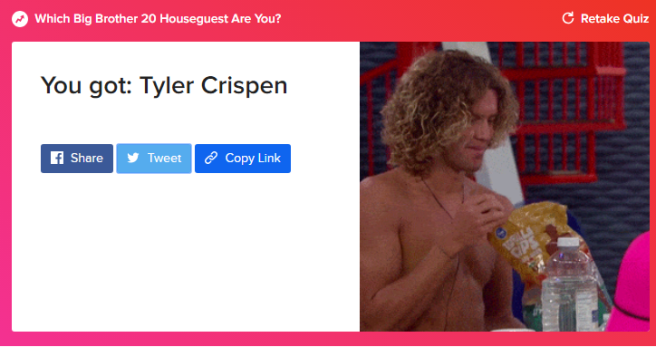 All together now: WHO FLIPPED?

As one Twitter citizen put it, when (not if) Fessy gets evicted, Fessy won’t leave the house, until he finds out who flipped the vote on him. Can’t you just hear the sound of grinding gears?

Yeah, RS is gone. Kaycee will finally have Sam back, because guess what I heard: Tyler is gay or bi!

That would explain why all the females are so comfortable with him, but he’s never been in a showmance, with any of them (he only kissed Angela on the cheek).

JC said Tyler was LGBT, and he didn’t deny it or get upset. JC also, seemingly randomly, gave Tyler a good night kiss, the other night.

I know the winner of Survivor Season 1 is gay. If Tyler wins, he will be a gay/bi BB winner (!), if he self-identifies that is. I hate speculation, but you also can’t force people to say what they are either.

Fessy and JC: NO

Please self-identify Tyler. Maybe I’ve been reading him wrong/hating on him falsely all this time.

In related news, on the flip-side, 3-showers-a-day Fessy thought Swaggy C was gay, when he first met him. I could be wrong, but I don’t see it, Fessy. 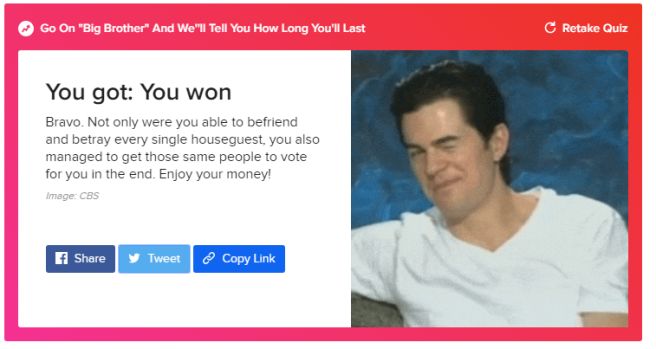 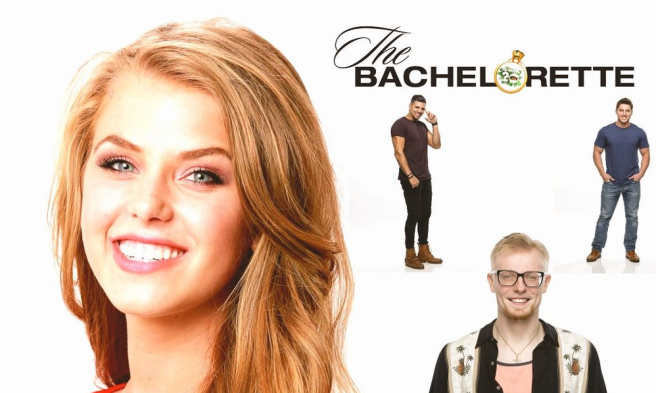 Sam called it, re. gay/bi Fessy, and I trust her reads on people. Fessy is called #MessyFessy, on Twitter, because of his slipshod game-play, but apparently he takes three showers a day!

I am not judging him at all. I think Fessy is a great guy. But he may have to take a hint that Hay isn’t as into him, as he thinks he is into her. Brett is the best man for Hay, not Scottie or Fessy. And JC is too small. Better luck next time Fessy!

Sam has worked as a waitress, a hairdresser and a bartender, in addition to her job as a welder. These are all professions that require good listening, over always speaking, and assessing a person’s mental situation, in mere seconds.

Almost everyone is hating on Sam, on Twitter, especially Tyler stans, who want her gone, before she can spill the beans on Tyler’s Cloud app power. However, I still maintain that Sam could win the whole thing. She has finally ascended to my Final Five, replacing Rachel.

The crush on Brett (!) took many people by surprise, including me – although, if true, it totally explains Sam’s confusion and hurt. There’s a ton of self-esteem issues there: compared to all the models in the house, she feels inadequate, as far as being able to attract her desired person, even though, compared to normal people, not on TV, Sam is very hot.

The LA models in the house, including the men, understandably won’t eat things with sugar, and are on this fad diet, or that fad diet. They are working for their looks. But compared to the upper middle-class LA elite in the house, poor Sam is middle class or working class.

When your parents prepare something for you, you eat it – all of it; you clean your plate. Waste not, want not. Sugar and fad diets have nothing to do with it. So, some of Sam’s anxiety is coming from extreme culture shock. She was relating this to Hay, in the HOH room, last night.

To be honest, Sam’s thing with Brett seems forced, although Brett is a way better guy, than Tyler. There’s nothing behind Tyler’s eyes; his smiles don’t reach his eyes. If he was just a normal guy, I would take pity on Tyler, because he has suffered in his personal life.

However, since Tyler is in power, and is manipulating most of the females and some of the males, in the house, these signs that I see in Tyler, become red flags, and he comes off as creepy. Hence, all my jokes about vampires, and Faust and whatnot.

Brett, on the hand, although sometimes just as toolish and as insensitive as Tyler (his good-bye message to Bay), is full of genuine mirth and happiness. His smiles reach his eyes! Like I have noted before, he has charm, wit and class. He handles confrontations better than Tyler.

When Bay came at Brett sideways, in an unfair swipe, after Rachel went home, he calmly and kindly diffused the argument. Bay had no choice but to let it go and leave him alone. He did not try and go tit-for-tat with her, trying to get in the last word. Tyler did just that in the house meeting. When you argue this way, the tiff never ends. Bay was trying to walk away, during that house meeting, several times, but he kept sending along, one more jab. Brett is more mature.

Still, as one astute Twitter denizen observed, Sam seems to be falling in love with RS, not Brett. She made RS promise, to talk to her more than Hay. Honestly, RS is the only calming influence on Sam, and together they might go far. I am rooting for them. Like Bay, Kaycee was Sam’s stand-in Mom and (first?) burgeoning female crush.

However, on the same day slippery Tyler tried to emotionally manipulate Sam, with his Cloud app, Kaycee also tried to pressure her into voting out Bay, not because Bay, was a danger to Sam, or even to Kaycee, but really because Bay was coming after Tyler, if she stayed – the same way Tyler came after Bay, and got her evicted, almost unanimously, a la Kaitlyn.

So, the day of Bay’s eviction was the day Sam opened up her eyes and saw her adopted family – Tyler and Kaycee – for who they really were: just another set of people trying to manipulate and exploit her. Hence, the Sam tailspin I described in my last dispatch.

Later, last night Tyler and Sam did talk – but thankfully, they didn’t patch things up! Sam, in her own down-to-earth way, rightly identified Tyler as a ‘snake,’ to a bemused, shocked, and even a little angry, Tyler. She sees the same emotional darkness, threatening to consume him, that other super-fans also see.

Sam shouldn’t get pulled into the orbit of Brett, nor should the other Foutte members. Brett is there as the mole, and Hay and Scottie actually believe he has been kicked out of Level 4, when he is constantly reporting back to them, a la JC. Foutte people are so kind and/or naive that they don’t plant moles in Level 4 and don’t even suspect Level 4 moles (except JC, only recently).

If someone just randomly starts being friendly to you, and he or she has never talked to you seriously before, a red flag should go up, and you shouldn’t tell such a person anything sensitive (like Hay and Scottie still talking game in front of JC!). If Brett reels Sam in and just uses her for information and for votes, she will be devastated all over again, like she was with Tyler and Kaycee.

If RS and Foutte were smart, they would make sure RS is there for Sam, all the time. She has ‘turned’ Sam, as they say in the intelligence world. RS needs to continue to be a faithful handler, or else the agents of Level 4 will scoop her back up, again and use her as a double agent. This would be bad for Sam, Foutte’s game and for Sam’s peace-of-mind.

On the personal level, a tough girl, like Sam, needs to be nurtured, more than anything. Such women are tough, but they don’t know how to be soft or react when someone is soft toward them. Sam seems uncomfortable with any male attention she gets in the house, despite somehow craving romantic kindness.

Brett is slick, hip and cosmopolitan, but he isn’t a nurturer. Sam needs a nurturing Mom/wife figure. That person is RS. Reel her in Foutte. It’s the best thing for Sam and for them. 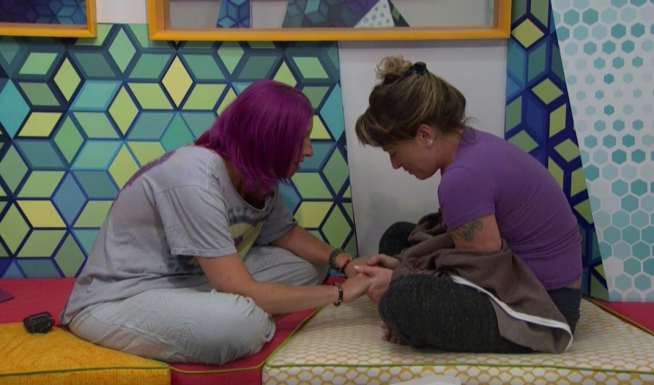