I was disappointed with Sam, playing with her heart, with the whole Brett-thing. However, similar to JC, Sam can also make good decisions, for game reasons and for personal reasons.

Sam has not reneged on her desire to see Tyler gone. She is still playing a strategic game. In fact, she thought Tyler was going home this week. I mean, Fessy is HOH; this is what was supposed to happen this week.

Sam is the key. Once Foutte is mopped up, the next one on the fodder roster is JC. The only way JC can maneuver to protect himself is through Sam.

Sam is the wedge that can safely go after other members of Level 6, like Brett, getting them out, before JC – because she is an independent, just like JC.

Without Queen Sam, there is no King JC. Sam’s whole spiel about her ‘person,’ is really just code for ‘Final Two,’ since the personal and the game are very much entwined for Sam – but not always to her detriment.

Sam and JC are the only people who can take out, fellow independent, Tyler.

Tyler is no longer Sam’s ‘person.’ He is no longer her Final Two. Hence, her search for a new Final Two, in Rockstar and Brett. However, Sam doesn’t even need people, like Brett, to make it to the Final Five. She is back in my Final Five – Sam, JC, Kaycee, Angela and Scottie.

Where does this leave Scottie? Sam may very well replace Scottie in my Final Four, because Brett has won the veto, and Scott doesn’t have a prayer. He doesn’t have an ice cube’s chance in hell – unless Fessy buys Sam’s pitch…

Sam needs to really play up how Hammock Brett is going to get Hay. She needs to make a dual pitch with Scottie, in which Scottie moves up his eviction speech revelation, that Hay had a Final Two, with Scottie.

Sam and Scottie need to make Fessy feel the threat of Brett getting his woman and/or that Hay has been unfaithful. Fessy needs to feel so enraged and jealous that he replaces Brett with Hay. This is the only way to save Scottie.

However, if Scottie does go home, I can understand. As I said, in my last dispatch, Scottie cannot escape that vote against Swaggy – just like Bay couldn’t get out from under telling Rachel about her power app.

When I saw Scottie fraternizing with Level 6, after Bay’s HOH, I internally felt very disappointed. Foutte has been horrible to Scottie. But games (BB, Survivor) and real life never reward traitors. Level 6 pretended to accept Scottie, but they knew that if he could turn on his original alliance – twice, since he voted Swaggy out, earlier – he couldn’t be trusted to hang with them.

I felt better when Scottie decided to go independent. Yet, the game is at such an advanced stage, and there are so few people, that there is no more time or room for a new independent alliance. Scottie was squeezed out. He had a great HOH reign, and then he was diverted by a futile crush on Hay – that will be his destruction, if he can’t get Hay up on the block, in his place.

SO, Sam’s plan is strategically sound. But she is talking to Fessy here. Regardless of Hay’s intentions, RS still went home, during Hay’s HOH (#48LawsOfPower: See what people do, not what they say). Unlike Hay, Fessy is actually hellbent on sending Scottie home, for personal reasons. Let’s see if strategically un-sound Foutte will, once again, damage itself critically.

Regardless of what happens to Scottie, Sam will be here and present for the endgame. Stop protecting that stupid pinky promise with Tyler, Sam. Expose his power app and declare war. The battle for Level 6’s union is at hand. 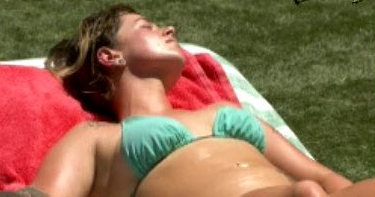