This is the quietest but hugest disappointment of the season: Angela, the Great, came in as a roaring tiger and left as a lamb. What happened to our powerful Ice Queen?? Why didn’t she cut her weaker mate, Tyler, like a ravenous black widow spider?

I didn’t want Angela’s heart to melt. I wanted it to grow 273.15 degrees colder – on the Celsius scale! Absolute zero! I wanted a second Ice Age, in the BB house! She could have won the whole game! Yet, she threw it away.

I do not like when players say, ‘I would love to lose to you.’ But do imagine that whoever says this (JC) wants to lose to only the mark (Tyler), and not to anyone else. If sufficiently incensed, JC may make sure Tyler loses to Kaycee, out of spite. People don’t like being humiliated – especially by secret Final 2s, made at the beginning of the game.

Throwing end-of-the-game comps is not unprecedented. Richard Hatch threw an endurance comp, on Day 38, forcing the winner of Immunity to pick whether they wanted to be in the Final Two with Rich, or Rudy. Rich bargained on the Immunity winner taking himself, and he was right. However, it’s not a lock that Tyler is as good as the first Survivor winner, Richard Hatch.

Regardless, the Veto Queen was back. This is Kaycee’s fifth POV win, alone. My ranking for who I hope to win is: 1) JC 2) Kaycee 3) Tyler.

‘No blood on your hands’ =/= best player. As I alluded to, in my dissection of what does a ‘bitter jury’ mean, the best player threads the needle, between being the nice guy, who didn’t upset anyone and being the bloodthirsty, mastermind/”super-fan,” who orchestrated every move and can take credit for every blindside, in the end.

The concept behind being the best player, as with most things in life, is balance. You can’t be the nice guy and win or expect to win when you’ve been carried, to the end – nor can you be completely aggressive and throw jury management (which is a part of good game-play) out the window. The best player plays as his or herself and interweaves all aspects of passive, aggressive and assertive (the Middle Path) game-play, just like in the 48 Laws of Power.

Oh, this is a totally different Final Three than what everyone envisioned. Two of my Final Five are there though: Kaycee and JC.

There was some talk, on Twitter, that Tyler, might be gay but it was totally unconfirmed (Swaggy C is also supposedly gay). Tyler may be bisexual, but even if he is, Tyler doesn’t like JC, that way.

I just don’t understand how or why JC is so in love with Tyler. I thought JC was more street-smart than that. But you can’t control who you love, right? Irrational emotions get in the way of game-play, again.

I mean, I get it: you have to shore up your position. But JC taking credit for everything – while not knowing that 1) Tyler is in Level 6 2) Tyler had a Final 2 with Kaycee and that 3) Angela and Tyler are in a showmance – is becoming insufferable, at this point. JC also didn’t win the second competition that he needed to win, to completely secure his ultimate victory – as I noted last week. Ugh.

I loved BB20 but yes, I am very excited Survivor DvG is starting next week! I say shorter BB seasons, with a larger cast and more double evictions – even earlier double evictions. Even Rob likes 70 days vs. 90 days. Three months is too drawn out. The only upside is segueing right into Survivor.

By the time it hits Labor Day, BB should be wrapping up or already over. Do a big Unofficial-End-of-Summer Finale. There should be no September Big Brother. We shouldn’t be waiting until the actual end of summer. Start Survivor earlier. New Fiscal Year, new blockbuster reality TV show. When the US Open starts, we should be in BB’s Final Three.

#Tangela is boring. When @kaitcoaching left, half of me left the game. Tyler looked like a giant because he was surrounded by ants. Of course, you can run the game against people like Fessy, Bay, Rockstar, Hay, Sam and JC. C’mon!

Bay got a second chance, with her HOH, after Swaggy left but she threw that chance away. That’s the only reason we still have Tyler here, today. I’m over Tyler; he’s overrated.

The true tragedy of the season is that Sam thought Tyler was lying about his secret power app. If only she had shredded that false Final Two and exposed Tyler’s conniving self, sending him packing – the same way Tyler sacked Bay. 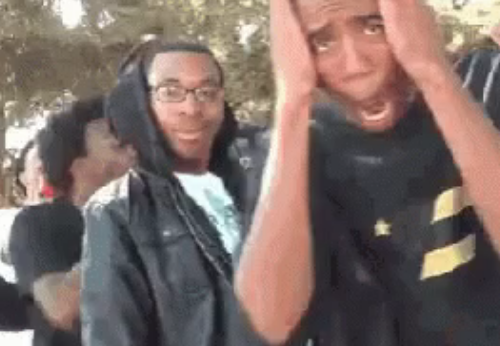 First One Out: Bi. 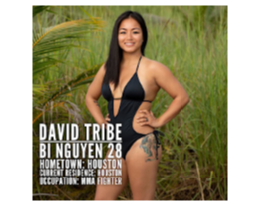 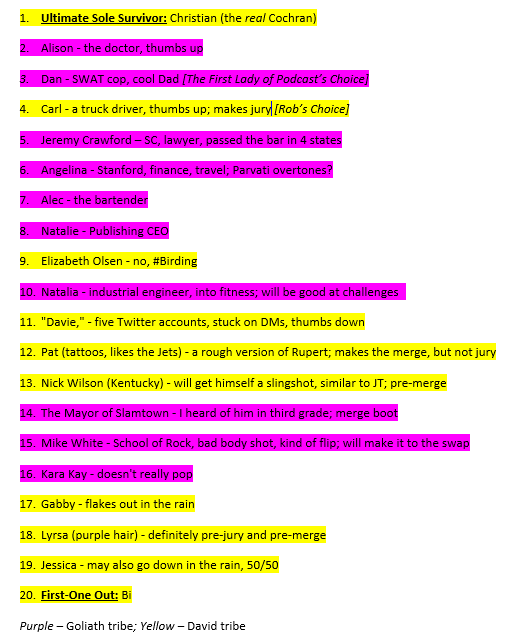 I can also see Alison as the winner. Being a doctor is a huge plus. The nerd king trend is kind of played out, but I am still hanging on to the Cochran.

Lyrsa definitely give me huge First Boot vibes, but every time I see Bi, and her being promoted so hard, I get cold feet. If the tribe is sitting under the shelter, hiding from the rain, Bi’s going to have a ton of pent-up energy/rage – that she could take out on her fellow castaways.

One pair who could be flipped: Dan could be a hidden jerk and Nick might be a cool Big Tom (from Survivor: Africa).

I would put Davie, the “blerd,” higher, but Nicole’s insight into the whole weird ‘sliding into the DMs’ thing, led me to put more people above him.