This doesn’t fit the exact definition, but Swaggy: JODY’s got your girl! A comparison could be made to when Hay spent five hours, at night, hanging out with Brett in the hammock, enraging Fessy.

I have never seen such a bad case of the mist. After the eviction, Bay ran to Tyler, like he was her one port, in the storm. She told him everything about the power, including that she can only change the noms before the HOH nominates people and that her power isn’t just good for this week, but until the final eight! That was a ton of strategic information.

Tyler and Angela are both trying to not spook Bay, so that she doesn’t use her power, and so that she can eventually be backdoored. Bay, Level 6 and the independent people don’t like you. Be cordial, but don’t give out strategic information to these people!

Bay’s rationale for not telling her alliance (except for Fessy) was because she wanted to use the power on herself, and not on any of her alliance members (selfish, I know). But by that very definition, it means that she would use the power on Tyler (and Rachel, if she were still here). What is she doing?

So, that leaves three votes unaccounted for, and what do you know – just by magic, there are three independent people left in the house – Tyler, Sam, and JC.

Tyler already claimed his vote, to keep Brett – but then these two other votes just magically happened to be there, for him to fall in with, like there had been a plan ahead of time, or something.

However, for Bay and for Foutte, those two rogue votes couldn’t have come from the two independents left. No, oh no – it must be Scottie, Hay or RS. So dumb.

Bay wants to fit in so much with the pretty people, of Level 6, that she is willing to trust Brett, Tyler, JC and Angela, over RS, Scottie, Hay, common sense and even statistical evidence (The numbers just don’t add up, to fit your hypothesis, Bay!)

The Winner of the Hacker Comp can:

1) change one of the noms before veto comp

2) pick a replacement nom before the veto comp

3) pick someone to play in the veto comp

4) on eviction night, he or she can eliminate one vote

The downside is that the HOH can pick the hacker as a replacement nom, after the POV, if someone comes down from the block, or change the Hacker’s noms back to what they were originally.

Angela, the Terminator, as expected, put up Scottie and RS – two members of Foutte – with a plan, with Tyler and Level 6, to backdoor Bay.

Bay didn’t use her power, before the noms, because she was lured into a false sense of security, by Tyler and Angela. Once again, so dumb.

But then, Hay won the hacking comp!

And better yet, she put Tyler up!

I REPEAT: Hay put Tyler up! And removed Scottie from the block!

Tyler couldn’t use his cloud power app, because the hacker ceremony was neither the HOH ceremony, nor the POV ceremony!

If the noms stay the same, and Tyler is still up there, next to RS, come eviction night, common sense will take over, and the HGs will realize Tyler is way more of a threat, than RS, who doesn’t even know what 30 times 60 is. Vote out Tyler!

Of course, all of this can still be reversed, by the vicissitudes of the powers, the hacker powers and most importantly, the POV comp and ceremony. However, I am happy to see someone finally take a shot at Tyler. The vampire isn’t immune! I have newfound faith in the game. Don’t write out a check, to Tyler, for $500K, just yet. 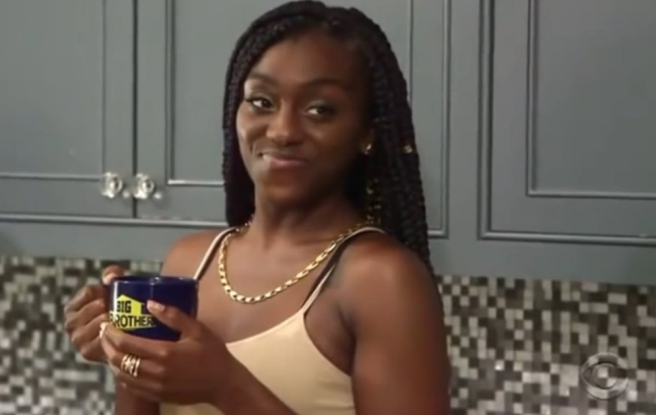